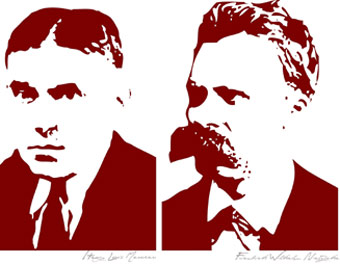 H.L. Mencken (1880-1956) was an American intellectual force active in the first half of the 20th century. Born in Baltimore, where he would spend his whole life, he was the son of German immigrants. His father was a conservative, a self-made man, a cigar factory owner, whom Mencken relates as having been opposed to the 8 hour work day and who spent his own money to cause a union of cigar factory workers to go bankrupt. Mencken’s chief literary contribution is considered to be The American Language, a study of how the English language is used in the United States, but he was much more than that to Americans in the early 20th century. His syndicated columns for the Baltimore Sun were read across the United States, and he was regarded as one of the preeminent intellectuals of his time. He was friends with F. Scott Fitzgerald and Sinclair Lewis, and he was an early advocate of Ayn Rand. Like Gore Vidal, Mencken was self-educated, did not attend university, and had decided at an early age that he wanted to be a writer.

Like Nietzsche, Mencken was an iconoclast. There are clear cut examples of racism towards Jews and blacks in Mencken’s work, but, at least in the case of Jews, Mencken is conveyed by Vidal as being sympathetic to the plight of Jews in Nazi Germany, and having promoted the cause of Jewish refugees. He was also a famous early champion of teaching evolution over creationism, having covered the Scopes Monkey Trial (1925). Mencken’s coverage of that trial was fictionalized into the play and eventual film Inherit the Wind, in which he was portrayed by Gene Kelley.

The Philosophy of Friedrich Nietzsche (1907) was Mencken’s second book, his first being a summary and commentary on the plays of George Bernard Shaw. It was written during a time in which most of Nietzsche’s work had not been translated into English, and Mencken’s pedantry and fluency in German placed him in a good position to write a book on Nietzsche. It is clear from the book that Mencken had read everything (or almost everything) Nietzsche had written (that was available at the time) and had his own early, tolerably good understanding of it. At about 200 pages, it is a short and inexpensive book. Published only seven years after the death of Nietzsche, Mencken’s interpretation is an early interpretation, and one likely to be dismissed by modern scholars as being simple and archaic. But, in my view, the earliness of Mencken’s book makes it rather the best available introduction to Nietzsche, because it is short, to the point, and not influenced at all by modern scholarship. It is simply the work of a near contemporary who is capable of understanding Nietzsche on his own terms, who enjoys Nietzsche on his own terms, and who can formulate his own opinions of the man. Had Mencken met Nietzsche, they probably would have become friends.

There is a tendency in modern scholarship to reinterpret taboo doctrines that are available in the original as not meaning what they originally meant. Since Mencken’s book comes from a previous era, one predating even World War I, its position in history makes the book incapable of such revisions. In it we have a clear, brief summary of Nietzsche’s thought, which includes the good, the bad, and the ugly, all of which Mencken accept wholeheartedly. In fact, Mencken’s exuberant Nietzscheanism is likely the key to understanding Mencken’s intellectualism as it develops throughout his life.

In Mencken’s work, Nietzsche comes across first and foremost as a critic of morals. Nietzsche’s revolt against morals was a revolt against his childhood, having been raised in a devoutly religious home, and having been the son of a pastor. When Nietzsche came of intellectual age, early doubts kindled a raging, unquenchable desire for truth. Nietzsche’s philosophy is driven by a desire to know the truth about moral propositions, and his approach is historical/genealogical, having been influenced by his  training in philology.

Nietzsche’s earliest work is The Birth of Tragedy, in which Nietzsche traces the origin of Greek tragedy to the conflict between two primordial forces: the Apollonian and the Dionysian: “the life contemplative and the life strenuous . . . law and outlaw . . . the devil and the seraphim” (Mencken 17). Apollo is the force of reason, harmony, law and order, a force that divides the world logically. Dionysus represents a more primordial force. He is associated with drinking and revelry, and the unity felt when a group comes together in a festival. The Dionysian festivals were essentially large drinking orgies, in which the constraints of society were thrown off altogether.

This strain of thought continues and is transformed throughout Nietzsche’s work. As one who does not obey the laws or morals that have been handed down, the so-called superman is an exemplar of the Dionysian instinct. He is governed by a force that comes from within, and that force is a modification of Schopenhauer’s will to live, which Nietzsche calls the will to power. Mencken has been accused of mistaking Schopenhauer’s will too live for Nietzsche’s will to power, but the accusation is not fair.

Later, Nietzsche provides what is and ought to be considered the most insightful critique of morals in general and of Christianity in particular. Morals arise when what is expedient for a society (e.g. “thou shalt not kill”) is attributed to God or a god. This is the common way that morals arise. The problem with this is that as a society changes, unlike scientific ideas, morals ideas bring with them an absoluteness and rigidity. What is expedient for one generation is no longer expedient for the next, so that the morals become cumbersome and a hindrance to progress. It may seem strange and even fascist to throw out morals for the sake of progress. In the view of both Mencken and Nietzsche progress is like a tide that will cause all ships to rise, but it cannot occur if it is encumbered by weaklings and outdated moral precepts, which leads us to the Bad.

One cannot help when reading Nietzsche or Mencken but to picture at times an insane person with delusions of grandeur, perhaps influenced by some or other substance, hiding behind a pen. Far from being a dig, that is what I often consider the best and most charitable interpretation to be of things that are said commonly by both Mencken and Nietzsche. Of the two, Mencken would be more likely to step on his own foot, and Mencken had more racist tendencies, but both Mencken and Nietzsche take their elitism to an absurd level. Here, is Mencken in such form.

It is apparent, on brief reflection, that the negro, no matter how much he is educated, must remain, as a race, in a condition of subservience; that he must remain the inferior of the stronger and more intelligent white man so long as he retains racial differentiation. Therefore, the effort to educate him has awakened in his mind ambitions and aspirations which, in the very nature of things, must go unrealized, and so, while gaining nothing whatever materially, he has lost all his old contentment, peace of mind, and happiness. Indeed, it is a commonplace of observation in the United States that the educated and refined negro is invariably a hopeless, melancholy, embittered, and despairing man (Mencken 117).

Overall, Nietzsche and Mencken are both apparently extremely elitist, in word if not in deed. They have no sympathy for the “slave” class, and, in one way or another, justify their being there. Mencken continues.

Nietzsche, to resume, regarded it as absolutely essential that there be a class of laborers or slaves–his “third caste”–and was of the opinion that such a class would exist upon the earth so long as the human race survived. Its condition, compared to that of the ruling class, would vary but slightly, he thought, with the progress of the years. As man’s mastery of nature increased, the laborer would find his task less and less painful, but he would always remain a fixed distance behind those who ruled him. Therefore, Nietzsche, in his philosophy, gave no thought to the desires and aspirations of the laboring class, because, as we have just seen, he held that a man could not properly belong to this class unless his desires and aspirations were so faint or so well under the control of the ruling class that they might be neglected. All of the Nietzschean doctrines and ideas apply only to the ruling class. It was at the top, he argued, that mankind grew. It was only in the ideas of those capable of original thought that progress had its source (Mencken 117).

Mencken’s work on Nietzsche is arguably the best introduction to Nietzsche because nothing is sugar coated. Mencken cannot be blamed for his praise of the work of Nietzsche’s sister Frau Forster-Nietzsche as a Nietzsche caretaker and advocate, even though it was later discovered that the latter altered some of Nietzsche’s work to make it more amenable to Nazism (cf. Kaufmann: Nietzsche: Philosopher, Psychologist, Antichrist). Overall, Mencken comes across as a young Nietzschean fanboy, eager to please, who held many of Nietzsche’s tenets for better or worse throughout his life. Nietzsche comes across as an elitist, moral genealogist, intellectual, madman, and literary artist (not necessarily in that order). There is plenty to relish and abhor in both Mencken and Nietzsche, and Mencken provides a unique insight. A worthwhile read.