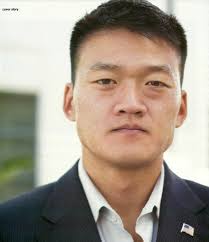 Scouring the internet for stories, I came across the story of Lt. Dan Choi, a Westpoint graduate and Iraq veteran with expertise in the Arabic. In the following video, Choi details how he became an unlikely activist against the “Don’t ask, Dont tell” policy of the military. Choi comes across as a mixture of simpleton and genius. He describes how at 27 he had his first experience of “love” and his desire to tell everyone he knew, but how the “Don’t ask, Don’t tell” policy required him to change the name of his lover from masculine to feminine. Eventually, things came to a head, and he had no choice but to tell the truth to friends and loved ones. With this simple act, he was now an activist and dissenter, a role which he embraces as naturally and unthinkingly as he embraced the love that he found. To us common folk, the story is one of courage.