Last July, Noah Philips wrote an article in which he exposed some controversial upcoming animal research that had been approved at the University of Wisconsin, Madison. Under the direction of lead researcher Ned Kalin, 40 rhesus monkeys would be taken from their mothers at birth. For their first weeks of life, they would not be socialized. They would be placed alone in incubators with feeding bottles and a “soft surrogate,” and masked researchers would give them only the bare human contact necessary to keep them alive. After this initial period, the infant monkeys would be placed together in pairs to be “peer raised.”

Throughout their first year of life, the infant monkeys would be exposed to threats in an attempt to evoke an anxious temperament. The test protocol calls for the use of not only the monkeys, but a live king snake. The rhesus monkeys have a genetically programmed fear of snakes, and that is why a large, intimidating snake was chosen. Researchers would attempt to terrify the monkeys in other ways as well. One method includes the introduction of an unfamiliar human who approaches them without making eye-contact.

The test protocol is vague about what the difference would be between how the control group and the test group would be treated. Previously, Kalin published a paper on a similar experiment in which he selectively brain-damaged a group of test monkeys and then exposed them to stressors. This was accomplished by applying acid to the amygdala. The presumed end result of Kalin’s research, of which this experiment is only a part, is developing a drug for use on adolescents at risk for developing anxiety disorders.

The tests will take place at the Harlow Center for Biological Psychology on the UW Madison campus. The center is named after the psychologist Harry Harlow who first introduced maternal deprivation experiments on rhesus monkeys. In now famous and infamous experiments, Harlow removed newborn monkeys from their mothers and gave them the option of a wire mother that had a feeding bottle or a cloth mother. The infants would feed from the wire mother, but cling to the cloth mother, spending the majority of their time with the cloth mother.

UW Madison has received about half a million dollars of federal funding from the National Institutes of Health for Kalin’s upcoming experiment. It is part of a larger research grant from the NIH that totals about $1.5 million. According to Rick Bogle, co-founder of the Alliance for Animals and the Environment, UW Madison stands to make much more money than this if it results in a patented drug.

In response to Kalin’s proposed experiments, the Animal Legal Defense Fund requested information on the approval of the experiment. Universities are required by the Animal Welfare Act to gain approval for all use of animals in testing by an Internal Animal Care and Use Committee. When UW Madison refused the records, the ALDF sued. According to the ALDF, it was in response to this that Scott Walker attempted to introduce an amendment into the Wisconsin state budget bill to protect UW research from the state’s open records laws. The amendment was thrown out of committee this month.

Last year, Dr. Ruth Decker wrote a Change.org petition opposed to the experiments. At this point, the petition has over 400,000 signatures.

The petition notwithstanding, UW Madison has shown no indication of reconsidering or delaying the experiments. To date, there have been five separate protests, as well as leafleting campaigns, conducted by activists associated with the Madison-based group, the Alliance for Animals and the Environment. Last fall and winter, there were two protests and a candle light vigil. On April 10 of this year, protesters stood outside the UW regents meeting in Waukesha holding signs and attempting to engage the regents. On April 20, there was a “sit-in” protest at UW Madison, outside of the Harlow Center for Biological Psychology, where the experiments are slated to take place. 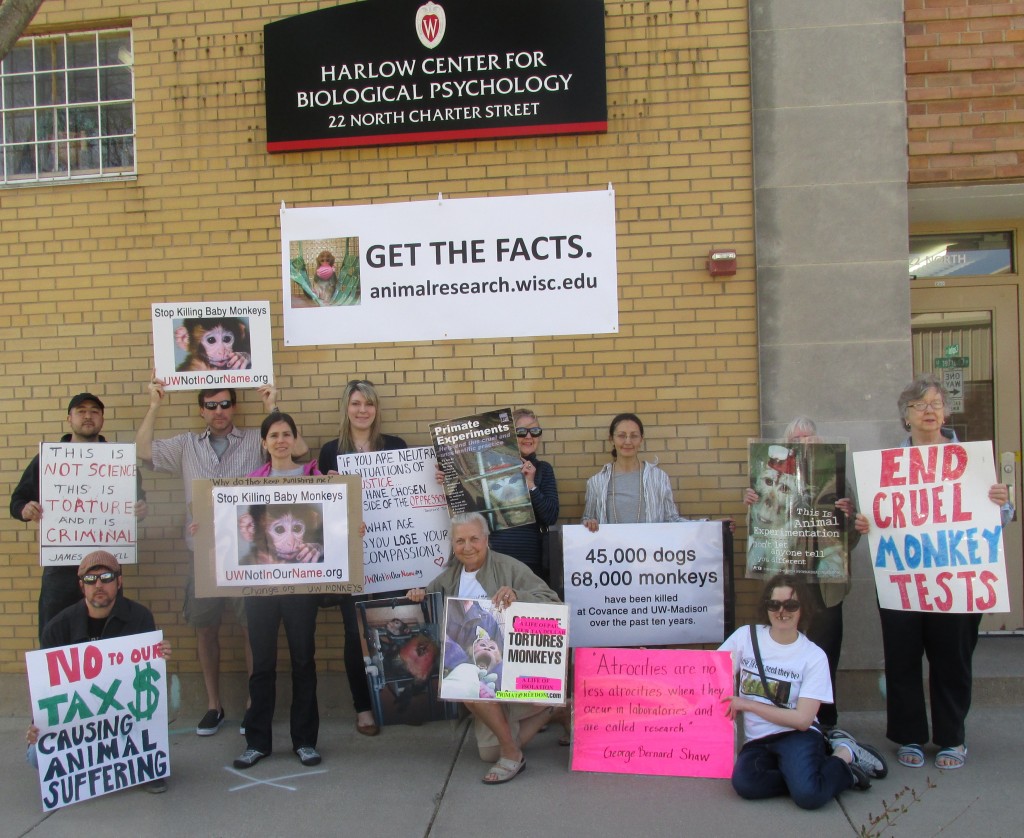 Animal Rights activists outside of the Harlow Center at UW Madison, April 18, 2015

Prior to the protest, UW Madison had placed an anti-protest sign, seen above, leading people to a website of its own that defends animal testing.

With tests slated to begin in June, time is running out for Kalin’s monkeys. UW Madison has conducted tests on primates since Harlow joined the faculty in the 1930s. Currently, UW Madison houses approximately 2,000 primates for research between the Harlow Center and the adjacent Wisconsin National Primate Research Center, of which 1,500 are rhesus monkeys. According to the Harlow Center website, all of the rhesus monkeys used there were born on site.

Given that primate testing has gone on at UW Madison for over 70 years, one wonders what would be necessary to see a stop to primate testing at UW Madison. Some animal rights activists claim that animal testing is ineffective and outdated, pointing to statistics showing that most drugs that are successful in other species do not succeed in humans. The truth may be more complicated. Animal testing may lead to scientific advances and breakthroughs, but, like testing on humans, it may be considered ethically unsound and should be regulated anyway. It may be the case that animal testing can only come to an end in any country if a federal law is made granting animals protections, and thus shielding them from scientific testing.

The U.S. lags behind other countries in protecting animals. In 2002, Germany made strong constitutional provisions to protect animals under their Animal Welfare Act, provisions that extend to lab animals and farmed animals. Experiments that are currently legal in the U.S. would be illegal in Germany. Still, there are no species-specific provisions in German law to protect primates.

In 2007 the parliament of the Balearic Islands, an autonomous community in Spain, granted personhood rights to all great apes, and urged Spain as a whole to do so. If approved, the law would “ban harmful experiments on apes and make keeping them for circuses, television commercials, or filming illegal under Spain’s penal code.”

New Zealand has forbidden the use of five great ape species in research and teaching.

Austria, the Netherlands, and Sweden have all banned the use of great apes in testing.

The U.S. has shown the smallest glimmer of hope via a New York judge’s recent decision to grant habeas corpus to two chimpanzees.

At the same time, there are no protections for other primates, such as rhesus monkeys. Philosophers are quick to point out a contradiction. If rhesus monkeys are similar enough to us for us to use them to gain valuable insights into our own psychology, then they should be granted a corresponding degree of legal protection. A lot of animal research may be considered to be good science but bad bioethics.

It is no coincidence that philosophers are willing to speak out against animal testing. When we farm and test on “lower” animals, we are treating them in a way that we would not want a stronger life form to treat us. We are also behaving as if there is a strong distinction to be made between the human and animal world, a distinction that science shows simply does not exist.

If it is the case that research institutions will not voluntarily leave behind the cash cow of animal research, and the only way to prevent primate experiments is through granting them legal protections, then activists are fighting an uphill battle. Although the great apes are protected from research in some places, those places are the minority, and there are no specific protections for primates in general. It appears that research will continue on primates, dogs, cats, and other species for the foreseeable future, and activists will continue to speak out against it, hoping for a long-term change.